The forensic identification unit acts as a support service and is attached to the operational side of the organization. The unit reports directly to the Staff Sergeant.  It is a technical bureau, which provides crime scene examination to uniform patrol officers. This is done in a myriad of ways including photography, collection and preservation of evidence, case preparation, and finally presentation of the evidence in court.

Presently, the unit is comprised of a qualified forensic identification officer; and 4 scenes of crime officers.

Officers in the unit attend the Ontario Police College for formal crime scene training. Each member has completed the Scenes of Crime Officers Course or S.O.C.O., which consists of a two-week course covering such subjects as, photographic principles, crime scene analysis, fingerprinting and trace evidence collection techniques. An additional seven-week course on Forensic Identification has been completed by one of the officers. This enables him to be qualified as an expert witness and give opinion evidence in criminal cases. In addition, the Port Hope Police Identification Unit has a trained DNA collection officer. This allows police to obtain blood, hair and mouth swabs from suspects via a special warrant. These samples are then sent to the Center for Forensic Sciences for DNA profiling. 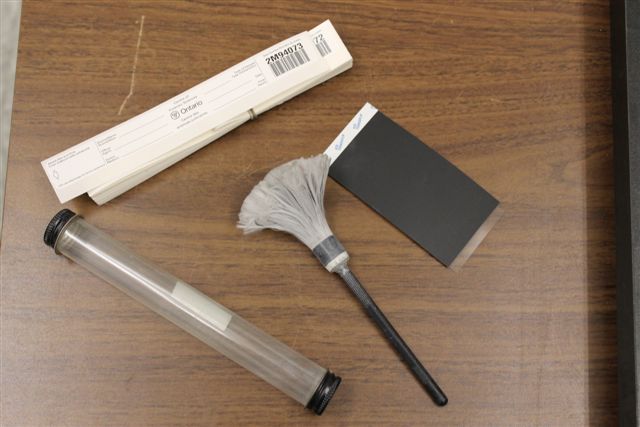 There are 5 cameras at the disposal of the officers. Each is used in a different capacity.

Nikon 3200 DSLR is a fully automatic digital camera.This camera is used for general identification scenes. It is equipped with a 60mm macro lens to allow 1:1 photography of latent fingerprints at scenes, for submission to the RCMP fingerprint database.

Canon 8mm video camera. This camera is used at large crime scenes or when there is a large amount of physical evidence. It is up to the individual officer whether or not to use it. As still photos can be made of any of the video frames it is a very versatile camera.

Each officer is outfitted with a personal kit for crime scene analysis. The kits include, but are not limited to the following:

There are also specialized kits at the officer's disposal. Each has its own specific use depending on the crime scene. For casting footwear impressions there is a dental stone kit. This material is what dentists use for making dental impressions for false teeth. It is poured into footwear impressions where it hardens. It can then be compared to the actual shoes of the suspect.

Casting of tool marks is accomplished through the use of elastomer. It is a rubber compound that is applied to a tool mark, allowed to harden and then used for comparison purposes. In addition, the unit has sexual assault kits, gunshot residue kits, and DNA kits supplied free of charge by the Center For Forensic Sciences in Toronto.