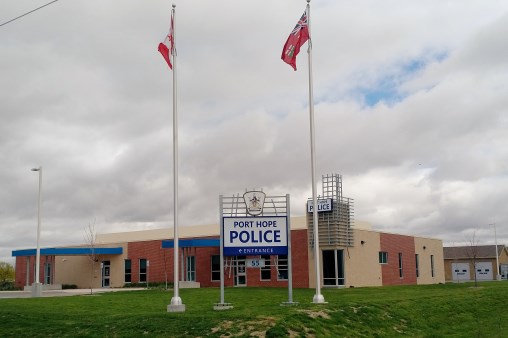 Male arrested for causing a disturbance and uttering threats.

On August 30, 2021, in the morning, police responded to a male causing a disturbance at the Town Hall on Queen Street. Police learned the male had also threatened an employee at the Town Hall.

As a result of the investigation, police arrested and charged 23-year-old Spencer RIPLEY, with the following offences:

2. Cause a Disturbance contrary to section 175(1)(a) of the Criminal Code

RIPLEY was released by way of Undertaking with conditions and a court date.

Driver arrested for impaired driving after police respond to a motor vehicle collision.

On September 4, 2021, police responded to a motor vehicle collision on Hope Street North, in the Municipality of Port Hope. A vehicle had collided into another parked vehicle causing extensive damage.

As a result of the investigation, police arrested and charged 29-year-old Benjamin MCIVOR of Port Hope with the following offences:

1. Operation while Impaired- Alcohol/Drug contrary to section 320.14(1)(a) of the Criminal Code

MCIVOR was released with a future court date.

Impaired driving is still a leading cause of death in Canada, by calling a suspected impaired driver, you could play a roll in keeping our roads safe.

Port Hope Police Service will be working along side with community partners, Ministry of Natural Resources and Forestry, and the municipal staff of Port Hope, in monitoring the Ganaraska River for the annual salmon migration.

Officers will be conducting foot patrols during the month of September, along the Ganaraska River and will be focusing on the following:

Port Hope Police Service would like to remind people to be courteous of the environment, and to clean up after themselves, to ensure everyone can enjoy this season.